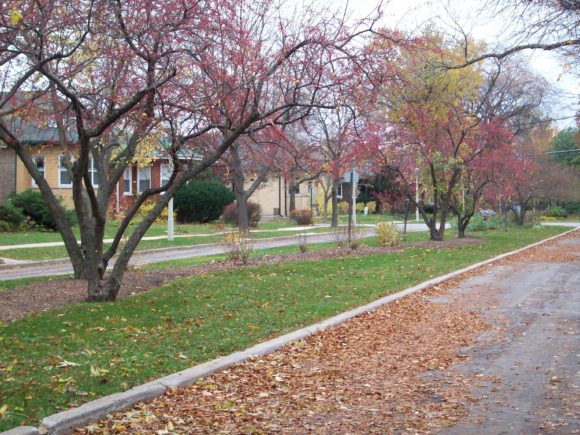 Reflections on My Summer with the Oak Park Regional Housing Center

I am a student at Vanderbilt University, a school where many of my peers have had internships since they were twelve. Okay, maybe not twelve, but you get my point. Vanderbilt is a school filled with high achievers. In an effort to keep up, I have filled my college summers with internships in a variety of fields. Now I’m here, the summer before my senior year, working at a non-profit in my home town.

I grew up in Oak Park, a suburb of Chicago known for its Frank Lloyd Wright architecture, commended for its diversity, and praised for its stellar school district. As an Oak Parker, I had a wonderful childhood. I played AYSO soccer, I spent summers in gifted programs at the local college, I volunteered at the hospital, and I ran a mentor program for middle school music students. I then went on to complete my tenure as an Oak Park kid in honors classes at the high school and by getting accepted into a top university.

Somehow I managed to accomplish all of this, while living east of Ridgeland.

Here at the Oak Park Regional Housing Center, I often sit on the side of the office where the advisors work. The advisor’s job is to provide clients with listings and other resources for finding a rental in Oak Park. They often give newcomers a quick rundown about what Oak Park has to offer, including information about the downtown, the schools, and the public transportation that offers easy access to Chicago.

The Housing Center gets clients from everywhere. Some clients are looking to relocate from a neighborhood in Chicago, while others come from different suburbs, counties, or even states. However, the diversity in client background rarely seems to make a difference when it comes to avoiding the “bad parts of town.” The comment I have been surprised to hear time and time again is a request to not be shown listings east of Ridgeland. There are two reasons I am surprised by this request. The first has to do with geography.

For those of you unfamiliar with Oak Park’s geography, it is important to know this: Oak Park is small, with a total area of only 4.7 square miles. The area east of Ridgeland Avenue covers approximately 1.5 square miles. When someone says they do not want to live east of Ridgeland, they are effectively eliminating one-third of the village’s residential area (and a majority of the rental market).

The second reason I am always surprised by the west of Ridgeland request is because of my own experience in Oak Park. Until this summer, I had no idea that negative sentiments about the east side of Oak Park even existed. I mean why would I? Nothing about my experience growing up east of Ridgeland would have prompted me to believe anything was wrong with where I lived. In fact, most of my friends growing up lived east of Ridgeland. Naturally, I attended many block parties, playdates, and birthday parties on “that side of town,” and as far as I know, we all turned out fine.

Oak Park has a competitive rental market, so why would someone eliminate such a large section of it right off the bat? Here’s another geography lesson: Oak Park shares two borders with Chicago. The Galewood community is north of Oak Park and the Austin community is east of Oak Park.

It goes without saying that the “west of Ridgeland” request is an attempt to minimize proximity to the Austin neighborhood. And more often than not, the desire to avoid this area is explained as a safety concern. Unfortunately, the safety issue doesn’t hold up against the facts. Crime is relatively low in Oak Park and, when you take density into account, it occurs at relatively similar rates throughout the community. In other words, the proximity to Austin means almost nothing when it comes to safety.

But for some reason, the east of Ridgeland commentary continues. There are several online platforms where parts of Oak Park are labeled as “iffy” and where tales of muggings and break-ins are used to steer people away from the east side of the village.

What I can’t help but wonder is who, exactly, is perpetrating this kind of dialogue. I find it hard to believe that anyone who took a walk on the east side of Ridgeland would perceive it as a “bad” neighborhood. The homes are nice, dog walkers will say hello, and in the summer many of the blocks are closed to traffic for block parties. Taken at face value, the east side of town does not appear to be missing any of its Oak Park characteristics.

But clearly there are people who do not feel the same way. It is not uncommon for a Housing Center client to come back from an apartment showing on the east side of Oak Park and explain that they felt uncomfortable in “that area,” or that it “seemed unsafe.” Thankfully, the excellent staff are adept at helping people see past these initial misperceptions.

And as the advisors often assure their clients, I am not saying that comfort or safety is something to be overlooked. Safety is important. What I am struggling with is how I can walk down the same block as someone else and see something completely different, how an area I see as safe, warm, and inviting can be perceived as dangerous. I am struggling with my naivete, with the fact that this is bigger than safety, and with the fact that this might just be about race.

The Austin neighborhood is predominantly black, somewhere around 85 percent. Studies show that people tend to have an amplified perception of crime in black and minority neighborhoods (Moye, 2013). One study, in particular, shows that the percentage of young black men in a neighborhood is positively correlated with perception of neighborhood crime, even when actual crime rates and other neighborhood characteristics are controlled for (Quillian & Pager, 2001). I imagine something similar is happening here in Oak Park. While the area east of Ridgeland is no more dangerous than the other parts of the village, it may be perceived as dangerous because of its proximity to the predominantly black Austin neighborhood.

I could be missing something here – in fact, I hope I’m missing something. I hope there’s some other legitimate reason that people are avoiding the east side of Oak Park. I can’t stress how important it is to avoid perceptions that are not based on facts. Steering people away from that part of town not only reinforces racial stereotypes about living near predominantly black neighborhoods, but also undermines our own community progress.

I will conclude with this: there are no “bad parts” of Oak Park. Most Oak Parkers would probably claim that they live on the best block in the village; I know I would. So the next time someone makes a remark about the east side of Ridgeland, I encourage you to challenge them on it. Ask them why they feel that way. There are countless measures we can take to improve our community, and breaking down the “east of Ridgeland” myth is one of them.