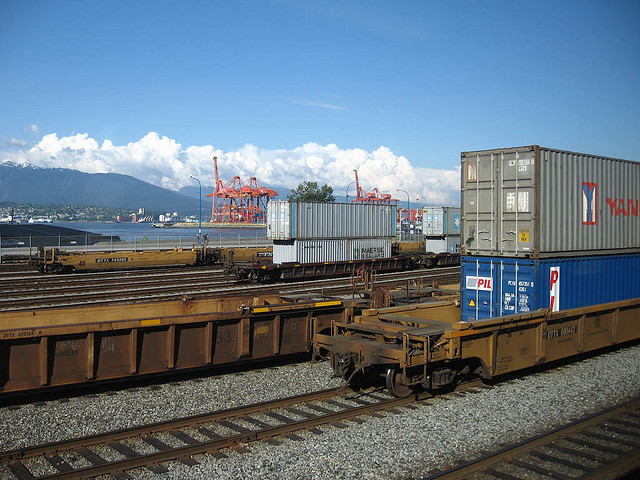 Metropolitan Chicago and its surrounding regions have the existing rail infrastructure in place to efficiently transport cargo in today’s globalized economy. Both partially-completed and finished goods are now required to travel further distances with the added pressure of delivering the cargo in a timely manner. In order to be competitive, firms are balancing their resources against the tide of growing prices of fuel, equipment, and labor. Inflated business costs highlight the necessity to utilize more cost-efficient methods like rail carriers in this world of intermodal cargo transport.

Intermodalism refers to containerized cargo being transported to its final destination via multiple forms of carriers. This part of the country is considered the epicenter of intermodal freight transportation because of two key advantages: its geographic locality between the coastal terminals and its existing rail infrastructure. The region’s significance is best illustrated by its wide access to every major type of carrier, including air, water, rail, and truck. The diverse array of access points designates this region as the nation’s busiest intermodal terminal, evidenced by the movement of over $3 trillion worth of freight annually.

By design, the intermodal industry thrives on diverse forms of carriers and this region houses the nation’s most active intermodal terminal. Chicago’s geographical position also widens the potential profit margins in this bourgeoning intermodal export market. It remains crucial that the seven counties region continues to develop a strong infrastructure in this region in order to take advantage of the economic benefits of nearly 50 percent of the nation’s containerized cargo beginning or ending here.

So while the economic opportunities of the larger enveloping region are abundant and notably attractive, it is not without its barriers. The Chicago Metropolitan Agency for Planning’s (CMAP) regional freight policy asserts that the key challenge in sustaining this region’s status as the national freight epicenter is to address the issue of insufficient funding. If successful in adding their provisions to the DRIVE Act*, leaders of this region would address an issue that would diminish the industry’s economic potency if left unresolved. If acquired, the funds should be directed at programs that maintain, modernize and expand the highways and railroads that are most used by freight and passenger transportation.

Unfortunately, forgone maintenance and modernization and expansion projects yielded a level of traffic congestion that named three Chicago locations as the country’s worst trucking bottlenecks, according to CMAP and a 2014 report by the American Transportation Research Institute (ATRI). Furthermore, the Chicago region has been listed among the country’s worst for its highway congestion resulting in billions of dollars lost every year.

Understandably, within the massive boundary of the larger metropolitan region of Chicago, the level of competition for federal grants reveals a concern in how the funds will be administered. The ATRI report is anchored by the notion that Will County should receive prospective funds on a priority status. It also argues that the southern suburbs of Chicago should be the focal point for intermodal infrastructure efforts in the future. Specifically, that upon receipt of the prospective federal funds, leaders of the seven-county region should take notice of the many advantages provided by the southern suburbs.

These advantages are best demonstrated in terms of the southern suburbs’ access to the four primary modes of carrier movement, which include their broad access to rail yards and major interstate highways, as well as the waterways of the Cal-Sag Harbor. Most notably, the region’s current level of congestion could potentially be alleviated by transitioning away from O’Hare International Airport’s freight-related ventures and alternatively focus on the development of a new airport in Peotone, Illinois.

For opponents of this proposal, that a third airport in southern Illinois would be unnecessary and impractical, I would make the case that streamlining O’Hare’s business ventures to focus solely on passenger flights alleviates pressures associated with being the nation’s busiest airport as well as traffic congestion. With two distinct modes of businesses now at separate terminals, an intermodal firm’s proficiency measurements–speed and reliability–may very well see gains in efficiency.

To envision an economically stable region coupled with steady-growth rates in the future, the leaders in the seven-county region would do well by initiating intermodal infrastructure efforts by developing a freight cargo plane terminal in Peotone. Implementing this proposal would fortify the chances of advancing regional equity as well as the economic benefits tied to participating in the burgeoning intermodal industry.

*CMAP Board drafted a letter to the Senate EPW Committee earlier this month and it was cosigned by leaders representing the surrounding seven-county region as well as the City of Chicago. Essentially, the letter began with approval for the DRIVE Act provision that relies upon performance-based criteria for national and state freight plans, yet failed to apply the same philosophy with regard to how funds are allocated.

Notes:
This blog post focused on freight policy for metropolitan Chicago and drew upon the past recommendations detailed in CMAP’s comprehensive regional plan, GO TO 2040. Next, the blog moved independently to provide evidence to support the position that Chicago’s southern suburbs are the preeminent location, within the larger metropolitan Chicago region, to initiate intermodal infrastructure programs.