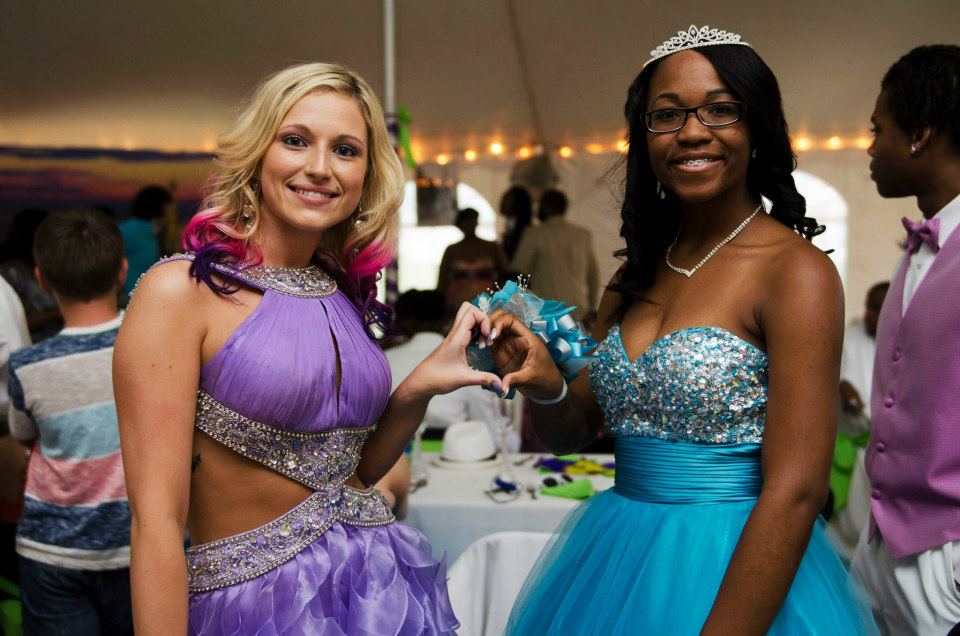 Wilcox County, a blue collar farming town 160 miles south of Atlanta, integrated their classrooms thirty years ago, with Georgia state legislation stalling their implementation of the 1954 Brown v. Board of Education decision. Since Wilcox County High School integrated, there has been no school-sponsored prom. Though integrated classrooms are now the norm, some extracurricular activities are still operating under the banner of separate but equal. For over forty years, tradition has gone like this- white parents and students organize a private, whites-only prom. Black parents and students organize a private, blacks-only prom. Homecoming dances, too.

Residents and alumni have noticed, of course. School officials say they have no control over the proms since they are private events. Some say its just old habit, or a matter of preference – does the DJ spin hip-hop or country tracks? (Maybe LL Cool J’s and  Brad Paisley’s current collaboration, “Accidental Racist” can bridge that musical dilemma.) Others say its just the culture, tradition. “If there’s something that you’re born into,” says a black Wilcox County HS alumna, “you think it’s normal.”

Throughout the county, preserving cultural traditions is a keystone of our human experience. Through culture we orient ourselves in the world and relate to our community and beyond. When traditions uphold an agenda that limits another human being’s freedom to enjoy the world, the cultural tradition could benefit from a reexamination. The way something has always been done does not justify maintaining it as the way it should still be done. Modifying an individual’s viewpoint to embrace a healthier acceptance of the whole can begin with an external change – opening a classroom to black and white children, hiring a woman to be railroad worker, installing a wheelchair accessible ramp. Our country has seen these opportunities in our past, and last month, in Wilcox County, Georgia, students saw an opportunity in their present.

A group of Wilcox students said it didn’t make sense to them to not attend prom with their friends. These guys and girls shared laughs on sports fields and in classes during the week, and on weekends around town and at each other’s kitchen tables. They didn’t want to separate the proms because that’s the way its always been done. They didn’t want to celebrate their high school milestone without their friends because their friends had a different color skin. Last spring, a white girl and black guy, two seniors who’ve dated since their freshman year, couldn’t attend each other’s white and black proms. “Just bring someone else to your prom,” they were told. Someone white. Someone black.

This year, the students held a desegregated prom, or as they called it, an integrated prom – or just, prom. “We are all friends. That’s just kind of not right that we can’t go to prom together,” said one girl on the planning committee. Maybe in a few years, a “segregated prom” will be a tradition that exists only in history. The Wilcox County High School prom itinerary sounds like a traditional prom in American culture – a Parisian masquerade theme. Tuxedos, ball gowns, a catered buffet. The students added a new tradition to their celebration – a unity toast.

This move by the students has seen overwhelming support, as the majority of citizens and media see this as a step forward for this rural Georgia town and our society. Republican and Democrat lawmakers in Georgia have voiced their support of the integrated prom. Georgia Gov. Nathan Deal has not, and seems to be focusing on the political aspect and not the human aspect of this matter. Deal has said he won’t publically endorse the prom as encouraged by NAACP and other advocacy and political groups, saying the prompting by these groups is for their own political agendas. Wilcox county school superintendent issued the following statement: “I fully support these ladies, and I consider it an embarrassment to our schools and community that these events have portrayed us as bigoted in any way.” This statement has since been removed from the school website and had been replaced by a statement about the school’s plans to consider hosting an official prom in 2014 school year. One of the students leading the prom planning committee says she plans to help next year’s graduating class keep the new tradition going, providing support so its easier for them.
The point of this story that resonates the most with me is where the change is coming from – not from the lawmakers, but from the students themselves. They observed a racist practice in their personal, everyday life and decided to make the change to correct it. Wise steps.