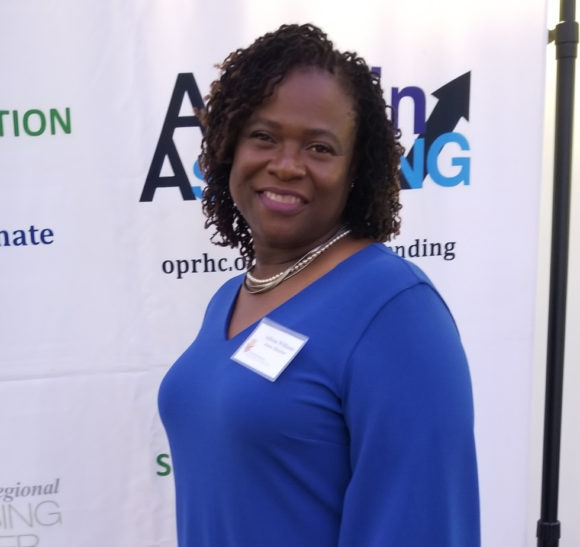 Oak Park Regional Housing Center (OPRHC) Board President Tracey Wik and Vice President Fabiola Candlish announced today that Athena Williams, a respected community organizer and activist, and most recently program director for the West Cook Homeownership Center of the OPRHC, has been appointed Executive Director of the 47-year-old agency, founded by the late Roberta (Bobbie) Raymond. The OPRHC is regarded as a leading agency for promoting fair housing rights and equal racial access in Oak Park and surrounding West Cook County communities including Chicago’s Austin neighborhood.

Speaking on behalf of the Board of Directors, Wik and Candlish issued a joint statement announcing the appointment, “The Housing Center is a national leader in the promotion of integrated communities. The appointment of Athena Williams as Executive Director positions us to move this legacy forward. She is a rare talent, and we are fortunate to have her at the helm. I could not be more optimistic about the future of the organization.”

Williams added, “We have a lot of work to continue in the footsteps of our founder, Roberta Raymond. We plan to build upon our site presence in the Austin community working to ensure affordable homeownership while continuing to promote fair and open housing that encourages racial, gender, and economic inclusion in Oak Park, and join the movement dialogue that is taking place throughout the country.”

Williams replaces Interim Executive Director Jay Readey, who joined the organization in February 2019 and will remain engaged as Strategic Advisor. Readey introduced Williams as the new Executive Director to 200 guests and stakeholders at the Housing Center’s annual benefit on Thursday, September 26. After the event, Readey said, “Athena Williams and I have worked very closely together these last several months. Her qualifications to lead the organization are exceptional, as she has earned the support of the Oak Park community.”

Williams previously served as an assistant to the late Reverend Dr. Lewis Flowers of the Westside Ministers’ Coalition, was a Chicago Public School Local School Council member, Associate Director of the Monroe Foundation, and an Administrative Assistant to 37th Ward Alderman Emma Mitts.

Williams, a product of Chicago Public Schools, holds a Bachelor of Science Degree from the University of Wisconsin Madison and holds multiple certifications in housing and financial counseling through NeighborWorks.