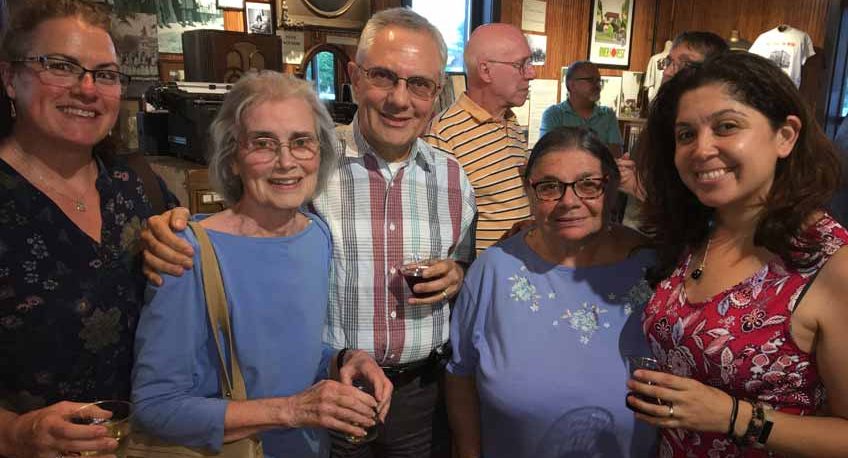 On August 21, the Oak Park River Forest Museum opened its doors to staff and board members of the Oak Park Regional Housing Center to celebrate over forty years of service to the Oak Park community by retiring Housing Advisor Louise Varnes, 82. The museum also served as a backdrop for a showing of their new exhibit on the 50th anniversary of the Fair Housing Ordinance passed by the village board in May 1968. The exhibit, Open House: The Legacy of Fair Housing uses photos, letters, protest banners, art, artifacts, and words to trace how race shaped the Oak Park community from its early days.

Varnes’ experience growing up and into early adulthood was a microcosm of racial relations and housing discrimination realities in the Chicago area. She grew up in the Northwest Chicago neighborhood of Edison Park and remembers the residents primarily being all white but recalled a little black girl who attended her parish school and was in her sister’s class. She didn’t remember the girl’s name, and said that during school outings the children were required to pair off with a partner, but that no one wanted to partner with the African-American girl. Varnes recalled that her older sister volunteered to partner with her. Varnes stated, “I remembered being impressed by that. It still makes me tear up. I loved my sister and she died young.  It was a very kind act of hers and she had to take a stand to do that, because the others didn’t want to do it. It was pretty hard to do that when you are a kid, to be the only one to take a certain position.”

Varnes indicated that her sister’s actions inspired her and that in her household hate was not taught to anyone. She said her mother was a school teacher, a good mother and a person she respected, saying that she was careful to be kind and polite to everyone.

As a young married mother with two children in Urbana, Illinois, Varnes’ family lived in an apartment and recalled the building owner asking the residents if they would mind if a mixed-race couple moved into the building, “I said, well of course not and we were upset that he would even bother to call us and ask that question — As it turned out, most of the people in the building agreed, but not everybody. They moved in and became our friends.”

After having moved once again, this time to Des Plaines, Varnes indicated that people joked about black friends who visited their home. This is when they decided that it was time to give Oak Park a try. Oak Park had passed a Fair Housing Ordinance in 1968 by a 5-2 vote, which served to change the community as it embraced racial integration. Varnes said that after researching what Oak Park was doing, they decided to move there.

Varnes started working as a volunteer at the Oak Park Regional Housing Center shortly after its founding in 1972, helping people find apartments in Oak Park. She later became a full-time paid employee. The Housing Center was established with the goal to help Oak Park become a diverse, inclusive and equitable community. According to her co-worker, Head Apartments Advisor Jerry Ehernberger, Varnes helped over several thousand people find a home in Oak Park. Varnes said she, “. . . enjoyed helping people from all over the country and all over the world. It’s a treat to have the ability to talk to people who are coming in from somewhere else, to learn a little bit about where they lived and what they expect in a community, and to be able to describe to them what our community is like and what we hope it to be.”

Varnes and her former husband successfully raised five children in Oak Park. She now lives in Forest Park and looks forward to sleeping in, connecting with friends, volunteering and remaining healthy. Of her experience at the Housing Center she said, “. . . what I accomplished was being able to do the job to the best of my ability — to be pleasant and welcoming to people who wanted to come and be a part of this community. We felt very much involved, my husband and I, in the idea that we wanted to live in a community that was not all white, that was composed of people from all different kinds of backgrounds, because that was right and fair and much more interesting than the other way to us — to be part of that kind of life and I wanted that for our children.”

The mission of the Housing Center is to promote sustainable integration and diversity by ensuring that apartment seekers have access to and fully consider housing in all areas of Oak Park, regardless of race or ethnicity. Additionally, OPRHC operates critical programming that allows us to reach outside of Oak Park and into surrounding communities through the West Cook Homeownership Center. We provide home ownership assistance throughout western Cook County and promote the Austin neighborhood to new residents, assist landlords with building improvements, and work with our partners to promote financial empowerment.

Please join us as we continue to promote the vision of a diverse and vibrant Oak Park community. On Thursday, October 4, 2018, starting at 5:30 p.m., we will be celebrating the 50th Anniversary of the Fair Housing Ordinance during our Annual Benefit being held at the historic Nineteenth Century Club, at 178 Forest Avenue, Oak Park, IL. Visit www.oprhc.org/benefit/ to purchase tickets and for more information.