Over the past couple of months, I’ve had the good fortune to speak to various audiences around the country about Oak Park and the Housing Center’s work to promote and sustain integration. In addition to being able to share our model with others, I’ve learned a lot about how much latent demand is out there for a Housing Center model in many other communities.

In these recent presentations, I’ve been including a graph that shows something that consistently grabs the audience. It is a graph for the census years of 1980-2010. On the graph I display two sets of data. The first is the percentage of Oak Park’s population that is white. The second is the value of real estate in Oak Park. The lines move in opposite directions. As the white percentage decreases, the value of real estate increases. You’ll notice that the line showing white population is levelling while the line displaying real estate values is increasing fairly sharply. Also, during the period from 2000-2010 (the two years I could get the data) Oak Park’s values increased at more than 150% of the regional average. 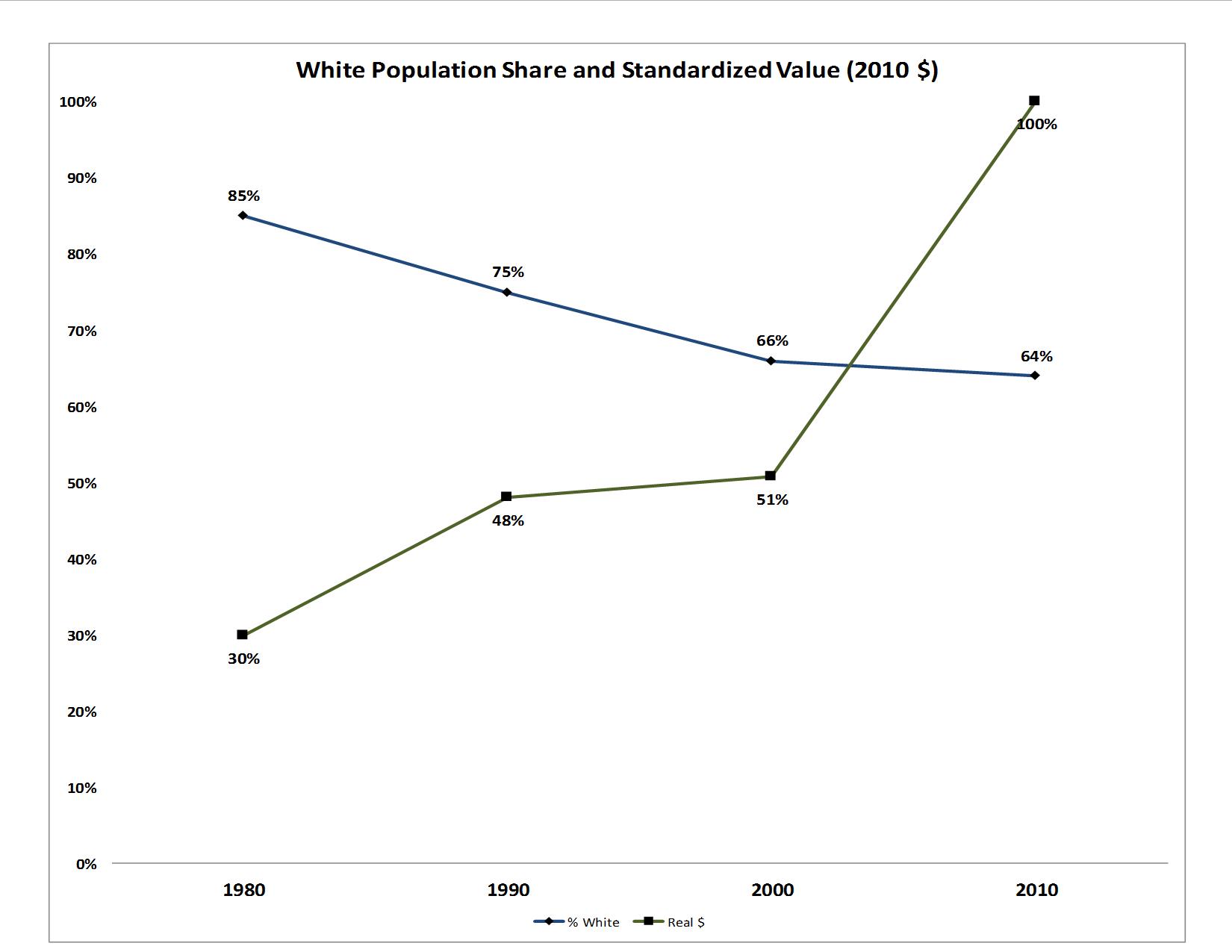 It’s a powerful graph because it demonstrates a reality that challenges the conventional wisdom about diversity and housing values. The typical belief is that property values decline as more people of color move to a community. But, in Oak Park, this is clearly not the case. Inevitably, I am asked how this is accomplished. How does Oak Park create an advantage out of diversity?

The answer is in intentionality. While other communities either ignore or fight against integration (and this happens in multiple directions), Oak Park has established diversity as a core value. Moreover, our programs and policies don’t stop there. They intentionally promote integration within Oak Park to ensure that people of different backgrounds live among one another rather than within specific parts of the community. After all, diversity without integration is segregation. Segregation, not diversity, is what truly harms communities. Segregation is a system of inequality that, through disadvantage and disinvestment, eventually pulls down more than the initially affected neighborhoods.

Integration allows a community to turn diversity into an asset. People living together can learn from each other, improve empathy, build integrated social networks, and find common purpose. Everyone wants a good education for their children, a nice home, and a community with enjoyable choices. Systems that encourage integration ensure greater equity across the community so that race and place are unifying rather than divisive (as they are elsewhere).

So long as we continue our intentional integration strategies, we should see Oak Park continue to prosper from its diversity.