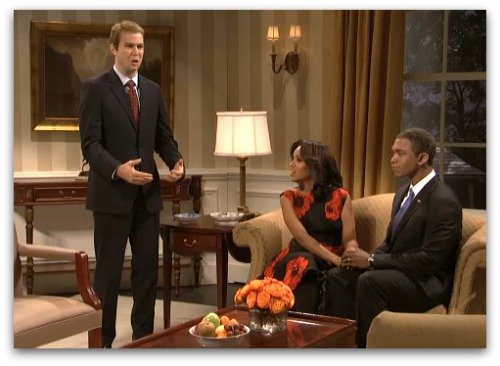 Saturday Night Live (SNL), the long-running sketch comedy show recently aired a skit addressing the lack of women of color in its cast.  In the skit, actress Kerry Washington portrayed Michelle Obama and sat with her husband in the Oval Office.  A White House aide informed the Obamas that Oprah Winfrey was outside the room and wanted to come in and talk with them.  The skit joked that Washington would have to leave the scene to change clothes and return as Oprah Winfrey, since she was the only African American female actress on the set.  Later in the skit, the White House aide announced that six Matthew McConaugheys were outside waiting to be seen, and then a procession of white male cast members entered the room.

SNL successfully poked fun at the lack of diversity in its cast, especially in this current season when six new cast members were hired and all are white (and only one is a woman).  Aside from the humor in the skit, SNL brought to light an important issue:  the lack of racial diversity in Saturday Night Live’s cast.  Since the show’s inception in 1975, only four cast members have been African American women.  Currently, the show has only three racially diverse cast members.  Kenan Thompson and Jay Pharaoh are African American males and Nasim Pedrad is a female Irani-American.

Lorne Michaels, SNL Executive Producer, commented that the show searches for a specific type of comedian: one with experience in sketch comedy.  This exclusive group of comedians creates a smaller pool of available potential cast members.  While the world of improv and sketch comedy has a long history of being white and male, minorities have been fighting hard to get noticed, and the schools that train students in improv comedy are working to develop and promote minority comedians.  Two major improv schools, Second City in Chicago and Upright Citizens Brigade in New York City and Los Angeles, have diversity programs that offer scholarships and administer outreach to develop a core group of minority students.  The number of available, trained sketch and improv comedians includes a considerable selection of minority individuals, which conflicts with Michaels’ comments.

Northwestern University professor, Miriam Petty, observed that the people making casting decisions – “the boardroom” as she names the group – generally consist of a majority of white men.  She explains that these men don’t intentionally exclude racial minorities (or women) from becoming cast members, but they also don’t spend time thinking about the impact of having a limited number of minorities represented in the SNL cast.

The impact of having a small number of minority cast members is substantial.  It ignores the experiences of entire groups of the U.S. population.  The diversity in the U.S. is ever-increasing, but the show remains consistent in its exclusion of racial minorities.  Many viewers are people of color but they are not able to relate to many of the skits, or don’t feel valued as members of society who can contribute to mainstream comedy.

It is also easier for skits involving racial minorities to include stereotypes because there isn’t a significant representation of minority cast members to influence the show’s writers or executives.  Cast member Jay Pharaoah refuses to portray females and Kenan Thompson has recently made the same decision.  The portrayal of black men as black women only served to mock the women, even if it was not intentional, because the impressions were exaggerated and unnatural.

SNL (and Lorne Michaels himself) also has the power to direct the future of comedy.  Movies and television shows have derived from characters created on SNL and former cast members have launched into movie and television stars (don’t forget late night talk show hosts).  Because Saturday Night Live is a major player in mainstream comedy, it is able to guide the future actors, characters, and content of comedy in the United States.  Without a robust number of racial minority cast members, the chance of minority comedians and their comedy becoming important after SNL is small.

A coalition committed to strengthening the power of African American voices, ColorOfChange.org, asked Lorne Michaels and Saturday Night Live executives in a recent letter to include more African American women in the show.  The group insisted that SNL make changes now and requested a meeting to discuss the ways that SNL can improve its diversity.  This is not the first group to criticize SNL for its lack of diversity or request the show to alter its hiring practices.  Many SNL viewers and civil rights activists want to see more diversity on the show.

For a show that has been such a major part of American life and culture, it is disappointing that it does not better represent America.  Saturday Night Live will, hopefully, seriously consider the appeals to diversify its cast and make positive changes in mainstream comedy and American society.