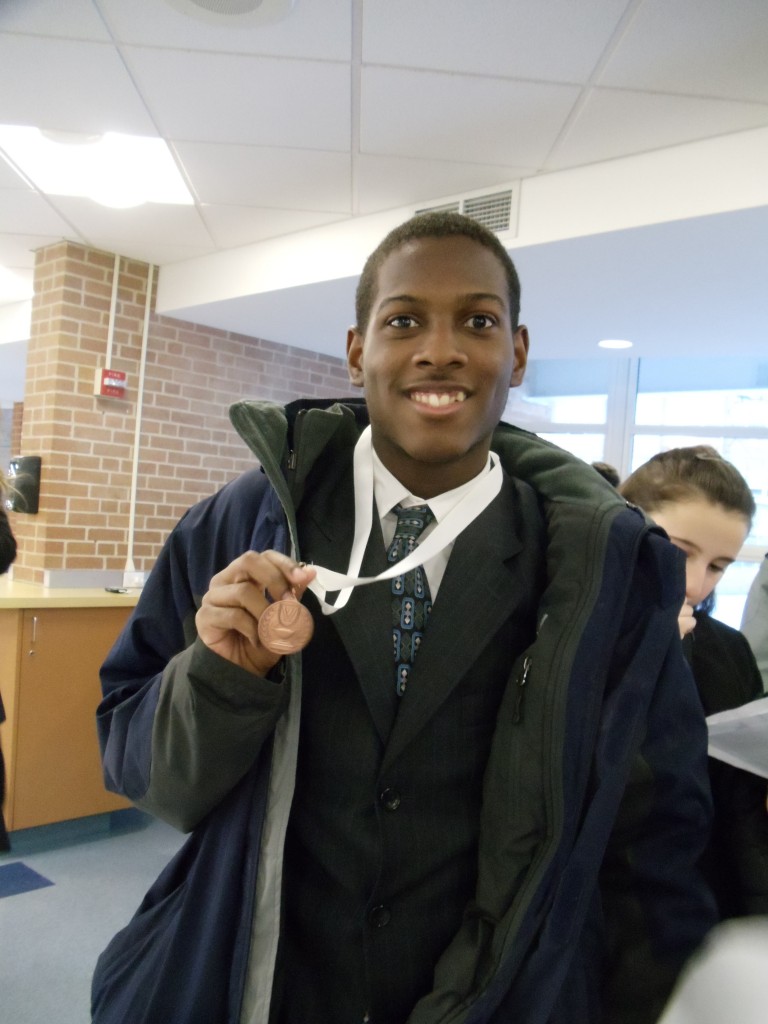 Below we present Anthony Moaton’s essay that details, sometimes humorously, the five lessons he has learned about how to move forward in life.

Taking That Next Step

As a senior, you face one of the most important decisions of your life. It’s not figuring out how many senior ditch days you’re going to take or when you’re going to start using “Senioritis” as an excuse for not doing your work, unless you’ve been doing that since freshman year. No, the most important decision is figuring out the next step of your life.

The next step: a phrase that has been used so much by many of the adults in your life at some point in time, whether it’s a geometry teacher making you figure out a proof, or your counselor telling you to get your act together.

So in a few short months, my graduating class will become active members of our society. Some of us have gotten into dream colleges, some of us are awaiting college news, and some of us just learned that colleges have application deadlines.

Even if you’re not going to college, you still need to decide what the next step in your life will be. And that’s an exhilarating yet horrifying idea at the same time. You’re taking control of your life and you want to do something important with it. But there is always that pervading fear something will go wrong, that in your attempt to take the next step, you’ll slip and fall, worried you won’t be able to get back up. And while that’s a great tie-in to Life Alert, in all seriousness, sometimes you become afraid of what your future will look like, and maybe that fear will hinder you from taking the next step, from moving forward. But ultimately you have to move forward because life goes on.

To me, moving forward means that no matter what type of life you may have led, you strive to better yourself, and through that self-improvement, things around you improve. Martin Luther King Jr. understood the concept better than most, consistently demanding that his fellow Americans start making changes. Part of his philosophy of nonviolence revolved around the idea of people becoming knowledgeable about the issues around them, and looking inwardly at themselves, and preparing for what may happen.

That leads to today’s sort-of “How-to” guide: “How to move forward with your life and take the next step.” It may seem hard. Maybe you’ve been weighed down by whatever events took a toll on you before. Or maybe you consider yourself lucky that not too many bad things have happened to you and life seems easy, but you’re scared of what the future has in store. What if life doesn’t go the way you want it to? So here we go, a quick little guide:

1) Figure out where you’ve been.

Many people know the old saying, “Those who do not learn from history are doomed to repeat it.” I take that to heart. I’ve had to go through many trials and tribulations to this day in order to get to where I am today. I’ve had to deal with poverty, family illnesses, and hardest of all, the loss of my mother this year. That is something I am still struggling to deal with, and it is something I hope none of you have to deal with. There seemed to be so many negatives in my life, constantly pushing me down. And sometimes I felt that my life would not improve. The thing is, I couldn’t give up because no one knows what the future has in store. People tend to respond to events like that in different ways. I guess my way of grieving has been throwing myself into everything I do, and pursuing the many interests I have. I’ve learned a lot in the short time I’ve been on Earth, and I know we all have learned a lot, and what that means is I’m not going to make the same mistakes that people around me have made. I’m not going to let go of great opportunities because I’m afraid of what might happen. Always remember that you can make a difference.

2) Think about where you want to go

This is extremely important. What do you want to do with your life? Do you want to become the next famous superstar? Do you want to be a firefighter? Do you see yourself just raising a family? No matter what you want to do, you have the chance to aspire to and achieve something great, so it is important that you have some sort of plan. It doesn’t have to be set in stone. According to collegeparents.org, 80% of college students change their major at least once, whether by choice or not. I’ve thought at some point that I was going to be a music therapist, and then an English teacher, and then a masseur. It is good to have something to attempt when we’re near or at the peak of our potential and can do so much in our lives. I don’t know anyone whose goal in life is to be a masseur, but if that’s you, go ahead; do something that makes you happy. Aspire to something. I finally decided (for now) that I want to go into environmental studies, to try to make a change in how people are living and are currently interacting with this planet. And yes, maybe come next year, I’ll be working in a tattoo parlor, but I wanted to dream about doing something because it led me to try my hardest.

3) Think about what’s stopping you

Life is not perfect. This can be seen through the Civil Rights Movement, and how Martin Luther King Jr. and many other civil rights activists attempted to make our nation a more accepting and diverse place. They encountered violent prejudice and corruption from people who wanted to stop them from achieving their goals — not just average working class people, but also people in positions of power. Now the U.S. Government probably isn’t the reason you can’t be a chef, but there may be pressing reasons why you can’t achieve your goal. When there is a roadblock, we tend to shut down and give up and either decide to find the safer route or not do anything. For me, my fear was all about one word: money. I knew that in order to obtain higher education and hopefully make a change in my life as well as in the lives of others, I needed money. The college I will be going to costs over $59,000 a year. So I was afraid that maybe it wouldn’t work out in my favor, but though I was conscious of my roadblocks, I was not going to let it stop me and shut me down. That’s the ultimate mistake.

4) Think about how you’re going to get there

You know what you want to do and you know the things that are in your way. So now what do you do? Well, you have to figure out ways to achieve what you want. Martin Luther King Jr. did not create his philosophy of nonviolence and how to achieve his goals of harmony among all human beings just so people could sit and think about it and continue with their lives. Now is the time to take action. I hunted down many scholarships and programs in order to try to achieve my goals of going to a good college and majoring in something that could help me help others. If I just sat there and hoped things would improve, or if I decided it wasn’t worth the effort, I would probably be unhappy. So this goes to the freshmen, sophomores and juniors out there: start thinking about what you’re going to do and how you’re going to get it. It’s not too early. You made your plan for your life, now start finding out how to obtain it. The thing is, you have so many resources to do just that. I don’t think I would be anywhere good without the help of my counselor and many of the teachers I begged to write college letters. Take advantage of all of your resources.

5) Try your hardest to achieve

Martin Luther King Jr. and other activists fought to their deaths to ensure that everyone would be considered equal. I’m not saying you need to kill yourself in order to become the best stay-at-home dad, but you can’t follow your dreams halfheartedly. In order to even qualify for scholarships, I had to work hard and show that I try to be a top student as well as contribute to society. For me, that meant taking many AP and honors level courses, and being a part of many extra-curricular activities that required me to be at this school from 7 in the morning till no earlier than 5 in the afternoon. I’m not saying that in order to live a good and successful life you have to take six AP classes, but you have to work hard and show dedication to whatever you’re pursuing. And I say this with words of caution. Don’t be fake. I’m involved in several different choirs, Marching Band; I participated in some sports, and I try to be involved in theater, as well as many of the other clubs offered at our school. The thing is, I only do things I enjoy, and all of those things work in my favor. If you’re unfamiliar with anime, or you call manga “main-gha,” don’t join the anime/manga club to show that you “do stuff.” I do feel people should try new clubs and activities, but it should be out of legitimate interest. Do things that you enjoy and that could lead to possibilities. I knew I wanted to do music forever because of how involved in the arts I am, but I didn’t realize I wanted to go into environmental studies until I took the class this year. I was interested and chose to take it, and I don’t regret it because now, I think I know what I want to do with my life. Do all that you can to obtain what you want, and you will be better for it.

You have to strive to make changes in your life, and in turn that affects others. That’s what Martin Luther King Jr. wanted. It’s what we should all want. That’s how your life can be improved and other lives as well. The only way you’ll ever find out is by taking the next step.