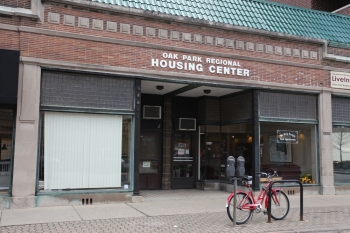 In 1972 as a group of concerned citizens opened the Oak Park Housing Center, the village was 99 percent white. But as they began their efforts to promote fair housing in Oak Park, academics from the University of Chicago and other prestigious institutions predicted that promoting diversity and avoiding white flight would be impossible. In the late 1980s, they admitted that the community had been successful but that the effort would need to continue for the long run.

The group that established the Housing Center — led by Bobbie Raymond and her master’s thesis researching stable diversity models — knew that the work ahead would be difficult. They also knew that it would be a delicate balance to both promote an open community to new black residents and combat white flight.

Directly east, it took just 10 years for the Austin neighborhood to lose a third of its white population. The change occurred through block-by-block “steering” and panic pedaling that scared away white homeowners and scammed black homeowners. Meanwhile, in neighboring suburbs, white residents and municipal powers were opposed to integration and engaged in hostility toward people of color. For the Housing Center and this community, neither of these scenarios was acceptable.

The Housing Center and Oak Park chose not to run from diversity but to embrace it. The result is known across the nation as the Oak Park Strategy. It has proven to be the most sustainable successful effort to promote suburban integration in the country.

Indeed, the success of the Oak Park Strategy began to attract other communities that hoped to learn from us and share information through a network known as the Oak Park Exchange Congress. The congress met 10 times over about 15 years and included municipal officials and fair housing advocates from across the country.

As time progressed, many of the communities began to fall out of the Exchange Congress. In many of these cases, the leaders of those communities felt that they had “done enough” or “become diverse” and felt that diversity strategies would no longer be necessary.

However, due to the constant turnover that occurs naturally in the housing market, these communities soon learned the error they had made. In most cases, the communities rapidly re-segregated from predominantly white to predominantly black. Other communities failed to attract people of color as expected.

In Oak Park and just a few other communities (including Shaker Heights, Ohio and Maplewood, N.J.) efforts continue to this day. Yet nowhere has the effort been as intentional and successful as it has been in Oak Park. The past 40 years have seen Oak Park’s population percentages steadily approach regional averages without undue hostility or fear in the community. During that time, the community also enjoyed something once thought impossible in diversifying communities — a steady increase in property values and new development.

The Oak Park Strategy, with the Housing Center’s mission of promoting diversity at its core, has benefited our community tremendously over the last 40 years. The past four decades have seen growing prosperity, a commitment to equity, and the development of a strong sense of harmony.

However, diversity is an ever-dynamic process and the full promise of the Oak Park Strategy is yet to be achieved. About one-quarter of all households move each year, meaning we will have to continue to promote integration. And while Oak Park is more equitable than just about anywhere else in the country, there are still gaps in achievement and opportunity to eliminate.

Thankfully, that small group of residents had the vision to open the Housing Center in 1972. As a result, we have a wonderful community to live in and a model of how diversity and prosperity can coexist.

This article was published by the Wednesday Journal