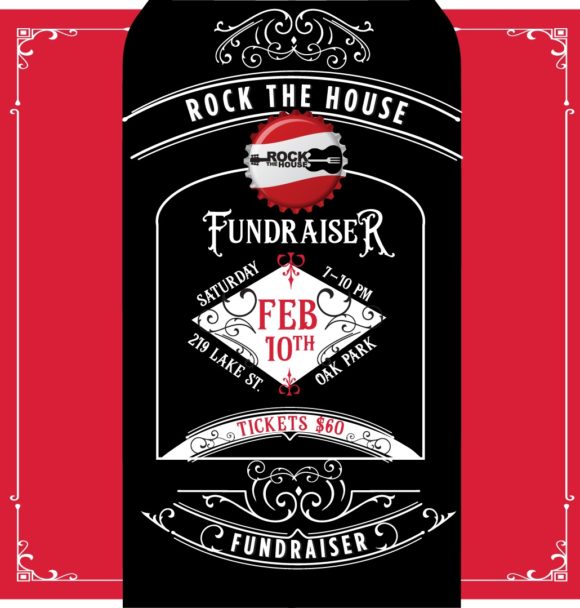 THANK YOU to everyone who came out for this always-great event! And thank you to all of our Culinary All Stars and Rock Star Brewers, and to our exclusive sponsor, @properties Oak Park, who helped make Rock the House the best party in Oak Park once again. See you next year!

This year will be the best Rock the House ever!

For a small additional ticket price, you can take part in a new feature to this year’s event: a speakeasy experience that will include your choice of cocktail paired with a special bite from Chef Melissa Elsmo! The Rock the House Speakeasy will be in a “back room” where only those with the “secret code” can enter. It’s sure to be a huge hit!

Our special musical guest will be Fernando Jones. Fernando Jones, a real Renaissance man, is an original. This world-class American bluesman, educator and songwriter was born on the South Side of Chicago in Bronzeville to loving Mississippi parents who were advocates for education and the arts. Jones has performed his compositions from Mississippi to The Smithsonian Institute and from Hawaii to Eastern Europe.

The evening will also include an additional performance by the School of Rock Oak Park Show Team!

Of course, we will have our Rock Star Brewers and Culinary All Stars at the party as well. You can enjoy unique craft beers from accomplished home brewers and taste culinary delights from chefs who call Oak Park home. All of these brews and dishes are created especially for this event.

Check out this page for updates on the chefs, brewers, bands, and this year’s tasting glass!

Melissa Elsmo: Melissa Elsmo makes you believe you can enjoy every meal just as she does: fully and enthusiastically. A trained chef and ardent foodie, Mel’s passion for a good meal peppers her life. She is a regular food columnist for Chicago Tribune Media newspapers reaching more than 500,000+ readers in the Chicago area via print and on the web. As part of Chicago’s underground supper club scene, she creates intimate 12-course dining experiences featuring her own recipes and artful approach to plating. Guests currently wait patiently for a seat around her table, but savvy food lovers can locate her at pop-up events around the city. Additionally, Mel is a passionate volunteer and frequently uses her kitchen talents to assist local philanthropic organizations with their fundraising efforts.

Su Jang: The owner of New Rose Catering grew up in her family’s Chinese restaurant. Her father told her to learn to cook and she would always have a job. New Rose Catering was formed after Su was laid off from her healthcare marketing position and remembered her father’s words and quickly began helping Oak Park, River Forest, and Forest Park busy families answer the dreaded “What’s for dinner?” question. In addition to providing weekly dinners as a personal chef, New Rose Catering also provides delicious and fun twists on classic dishes for small events catering.

Rich Klevgard: Oak Park graphic designer Rich Klevgard has been recreating BBQ classics for well over a decade. His obsession with southern barbecue traces back to his boyhood boarding school days in Chattanooga, Tennessee, a car ride down an unpaved road through trees to a shack in the woods where the only smell was burning hickory and the sweet, awe-inspiring flavors of pork. Today, Klevard’s dry rubs vary from sweet to savory with hints of coffee, caramel, coriander, and a touch of smoked anise. His sauces, often based from locally harvested honey or herb-infused rye whiskey, satiate but never overplay the deliciousness of smoked pork. Generous and enthusiastic, he enjoys using his culinary skills as a means to support various causes in the community.

Emily Paster: Emily is co-founder of the Chicago Food Swap and author of two cookbooks,  Food Swap: Specialty Recipes for Bartering, Sharing and Giving and The Joys of Jewish Preserving.

Ron Martin: Ron is a chef at The Chopping Block and a local cooking instructor.

Denise Norton: Denise was the founder of Flavour Cooking School and has authored Flavour Favorites: Beloved Recipes from 10 Years of Cooking Classes.

Dru Williams-Clark: Returning homebrewer Dru Williams-Clark, member of Turn it Up to 1100 Brewing, brings you East Of Ridgeland (rye pale ale). Brewed on an integrated block of the storied far-northeast side of Oak Park, this brew is the perfect balance of crisp rye sipability, full caramel mouthfeel, and citrus dry hopped bitterness.

Amy Hanson and Linda DeViller / FLED Bier: Amy is the alchemic architect behind FLED Bier, a home brewing enterprise founded with her brew partner in crime, Linda DeViller, which aims to perfect gluten-free brewing. With more than 15 styles of gluten-free brewed options, FLED will change the way you drink gluten-free beer. The beer FLED will be pouring at the event is their flagship brew, FLED, a Citra hopped IPA.

Graham Tillotson: Graham lives in Oak Park and spends most of his time on the road consulting, but at home he has a house full of beautiful girls who put up with his basement brewery. He is supported by Charlie, his faithful shelter dog. For this year’s speakeasy theme, batches of Al Pine-Cone are in the works.

Joshua Zylstra: Josh lives in Oak Park with his wife and two children, and he specializes in brewing hop forward ales. Josh works in the television industry on the Chicago PD series as a Leadman in the set decoration department. He also was recently elected president of the Oak Park Homebrewers Club, so stop by and ask him about the group’s membership drive while you taste his American IPA and English Brown Ale.

Nicolas Carrillo: It all started for curiosity: home brewing sounds fun. So Nicolas informed himself about everything related, and two years ago, brewed his first extract batch. After a year of playing around, one of his best friends took it seriously and asked Nicolas to brew his best beer for his wedding, which forced him to get into all grain. Ever since then, he says, every batch is fun because he gets to control everything. He says, “I’m lucky to be surrounded by good friends who help me finish and don’t waste any beer. Plus, they are my best critics about what one day started as a curiosity then hobby. Now I hope to convert this into a business.”

Tom Cavenagh: Tom lives in Oak Park with his wife, Yasmin, and is the father of three. His day job is as a professor at North Central College in Naperville. He’s been homebrewing for 5-6 years and is a member of the Oak Park Homebrew Club. His obsessive approach to brewing has earned him the name, in his house at least, “Heizenbeer” — after Walter White, aka Heisenberg, in Breaking Bad. Tom will be pouring a cocoa brown ale and a steam beer.

@properties Oak Park is the exclusive sponsor of Rock the House 2018! Visit this link to learn more about the agency that supports diverse communities.